The World Series of Darts has moved on to its final destination down under today with Phil Taylor holding an unassailable lead at the top of the ranking table after his masterful win in Sydney.

It was a strong start for a majority of the top eight seeds on day one of the World Series in Auckland. Seven of the eight seeds progressed to the Quarter-Finals, and only an impressive performance from Simon Whitlock prevented number eight seed Stephen Bunting advancing. 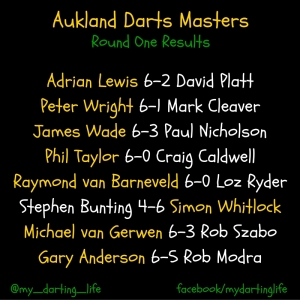 Adrian Lewis 6-2 David Platt
This match was, in the end, a comfortable win for Jackpot, as he dispatched ‘Babyface’ David Platt. There was early pressure on Lewis – after four legs the score was 2-2, however after Lewis went 3-2 ahead, he hit a 121 checkout and his average of 104 became too much for Platt to contend with.

Throughout the match Lewis hit three maximum’s and got a 54.55% checkout average, hitting six of his eleven darts at a double. This is a big positive for Lewis, as his doubles have been very shaky throughout the series, however winning four legs back-to-back will give him great confidence in the Quarter Final.

Peter Wright 6-1 Mark Cleaver
Peter Wright started as bright as his hair, as he produced a 180 with his opening darts and a 12 dart leg to go one up. Another 180 in the second leg,alongside a break of throw took Snakebite into a 2-0 lead sighted and a possible whitewash for the number 3 seed.

There was rumblings of a fightback from the New Zealander. Two missed darts in the third leg to break back, proved costly as Wright took the lead 3-0. However, Cleaver took the 4th leg in a very lackluster period of the match, to reduce the deficit to 3-1. A 116 and 81 checkout for Wright wrapped up the match 6-1 in unconvincing fashion with a 87.61 average. Despite the poor average, Wright advanced with relative ease.

James Wade 6-3 Paul Nicholson
Paul Nicholson had only ever beaten James Wade once before, which was over 4 years ago. However, the Aussie had never lost in New Zealand and one of those stats had to be broken. Unfortunately for Nicholson, The Machine lived up to his name, checking out a 108 in the first leg, after Nicholson had started with two 140’s. Wade continued his strong start, with back-to-back 180’s and a double 10 finish to break the throw and go 2-0 in front. Nicholson pulled it back to 3-1, splitting 38 to record his first leg of the match.

The pressure was on Wade, as he missed 5 doubles to extend his lead, allowing Nicholson to break back at 3-2. Nicholson applied more pressure, more back-to-back 140’s allowed him to level the match at 3-3. A possible shock to be on, until Wade hit a 70 and double 3, to break and go within one leg of the match. Two 140’s in the ninth leg, allowed Wade to build enough of a lead for him to win the match 6-3, with a 91.89% average. In fairness to Nicholson, he hit nine 140’s, the most of any loser in the last 16. Onwards and upwards for the ever dangerous James Wade.

Phil Taylor 6-0 Craig Caldwell
The Power meant business in this match, continuing his fine form from Sydney. He started strong, but so did Caldwell, who nearly won the first leg, however missed a dart at the Bull. Taylor hit a 68 checkout, then a 63 checkout to race into a 2-0 lead. It wasn’t until the fourth leg that The Power missed a dart at a double, however he patched it up to have a checkout average of 80% after 4 legs.

At this point, Taylor had blown Caldwell away and was showing his class, with a 108 checkout. Taylor seems to have worked really hard to improve on double 16, as he was hitting this frequently throughout the match. Caldwell was limited to ton-plus finish attempts and nearly avoided the drubbing of 6-0, but missed double 16 to take out 104. Taylor finished the match with a 104.86 average, and 75% checkout rate.

Raymond van Barneveld 6-0 Loz Ryder
Barney was sporting an unusual look – the 5 times World Champion was wearing earplugs for this match. The fully focused Barney showed no mercy to Ryder. Throughout the match, The Warrior didn’t have a single dart at a double as Barney took out 78, 80 and 112 to race into a 4-0 lead.

Barney only hit his first 140 in the third leg, however, the Dutchman progressed steadily into the Quarter-Finals as he completed the whitewash with an 11-dart leg and 98.02 average. Barney had a very good showing on doubles too, 55% which will stand him in good stead for the Quarter-Finals.

Stephen Bunting 4-6 Simon Whitlock
Simon Whitlock was the only qualifier to win their last 16 match and advance to the quarter-finals tomorrow, with a performance that didn’t quite reflect the scoreline. Tipped as game of the day, due the similarity of quality between the two players, Simon Whitlock started very strong, hitting two 140’s in the opening leg and taking out 76 to break the throw. Whitlock then doubled his lead by smartly taking out 62. Bunting decided to respond by hitting 3 back-to- back 140’s and a 14-dart leg to make the score 2-1. Bunting missed double 14 for a 107, letting in Whitlock to extend his lead to 3-1.

In the fifth leg, Whitlock dominated, however he gifted Bunting a reprieve when he missed double 20 for 112 finish. Bunting’s finishing was below par to say the least, missing 3 darts at double 16, before Whitlock eventually broke the throw to make it 4-1. Whitlock extended his lead to 5-1, checking out 68 to give himself further breathing space. A fightback brewed from Bunting, bringing the score back to 5-4 upping his average at this point from 92 to 98. However, Whitlock completed the victory, hitting a 2 dart finish to take the match 6-4. Whitlock ended with a 92.55 average, however a strong showing on the doubles, with a 66.67% average.

Michael van Gerwen 6-3 Rob Szabo
A very poor start from MVG, by his standards, saw Szabo have a dart at the Bull, before ‘Mighty Mike’ hit a 92 checkout to hold throw, with a 21-dart leg. Szabo wasn’t to be denied as he hit double nine after missing double eightenn for a 108 to level the match at 1-1. Mighty Mike was visibly stressed with his performance, pulling angry expressions whenever his darts did not do as he wanted. He didn’t play this way for long, as in leg three he hit two 180’s to set up a 12-dart leg. He then broke Szabo hitting double 18 to go 3-1 in front.

The ‘Green Machine’ kicked into overdrive, kicking off the fifth leg with another 180, finishing with an 11-dart leg to advance into a 4-1 lead. Szabo took control of the fifth leg, which included his first maximum, but he almost thought his luck went out when MVG left a 170, almost taking it out after just missing the Bull. Szabo showed great composure hitting double top, to reduce the lead back to 2 legs. The highest finish of the day appeared in the seventh leg, by MVG, who coolly took out a 131, to go within a leg of the match. Van Gerwen, then hit back-to-back 180’s in the eighth leg. Szabo showed his pedigree by sticking in there hitting double 10 to reduce the deficit to 5-3. However, MVG was not too be denied, hitting double 5 to round off the penultimate match of the last 16.

Gary Anderson 6-5 Rob Modra
Surprisingly, the World Champion really struggled to get past Rob Modra, who performed excellently and nearly pulled off the upset of the series so far. Anderson started brightly, breaking the throw of Modra, hitting back-to-back 140’s and checking out 88 on the bull. A 13-dart leg followed for the Scot,and a whitewash was on the cards. Modra clearly hadn’t read the script as he took out the first of three 100+ finishes, hitting a 100, to hold throw and make it 2 -1. Signs of a stuttering Anderson was highlighted when he was left on 72, instead of hitting a single 20, he hit the double, which put him off to an extent and allowed Modra to take out 126 to break back at 2-2.

In the fifth leg, Gary Anderson again messed up his scoring, having left 41, he hit the single 18, then left double 7. Modra swooped in, hitting 120 to go 3-2 in front. The sixth leg was a calamity for both on the doubles, as 11 doubles were missed before Anderson hit double one to restore parity. Modra then checked out 78, to restore the lead before Anderson hits 48 to make it 4-4. Modra went within a leg of the match, hitting double 8 to go 5-4 in front. Anderson then missed 3 darts at double 20, before hitting it on his fourth attempt, to take it to a decider. The pressure got to Modra, and Anderson stole it 6-5. Anderson ended up with a 95.88 average, but only 22% on the doubles.

World Series Ranking Points have been awarded at each of the first four events (as they will be in Aukland) – these will be used to seed the players at the World Series Finals in Glasgow this November. Have a read of our reviews of the previous events in Dubai, Japan, Perth and Sydney.

How about writing a World Series session review for this site? You don’t need to be a top class journalist at all – just watch the darts, write what happened, get it to me and we can publish it for all to see. Get in touch now.

Are you enjoying Darts on ITV this year? Maybe you’ve been to one of the World Series events or do you have an opinion on the relevance of the series? Let us know below, on Facebook or Twitter.